4 staked properties to date, in an area Southeast of Karratha, Western Australia.

International Prospect Ventures acquired 100% interest in 4 properties, in an area Southeast of Karratha, Western Australia. The acquisition strategy involved a review of known geology and historical exploration results, and a focus on coarse-grained conglomerate host rocks at, or in proximity to, a prominent and well-documented geological unconformity.

Several early-stage gold discoveries in the area southeast of Karratha, have been reported by Novo Resources Corp. (NVO) from several properties ("Comet Well" and "Purdy's Reward"; and near Marble Bar and Nullagine at "Beaton's Creek") and separately by two Australian listed companies, De Grey Mining ("Louden's Patch") and Artemis Resources Ltd. (JV with Novo Resources and other 100% owned properties). Collectively, these gold discoveries appear to indicate a potentially gold-rich district, analogous in broad geological terms to the Witwatersrand Basin and its related clastic sedimentary-hosted gold deposits. 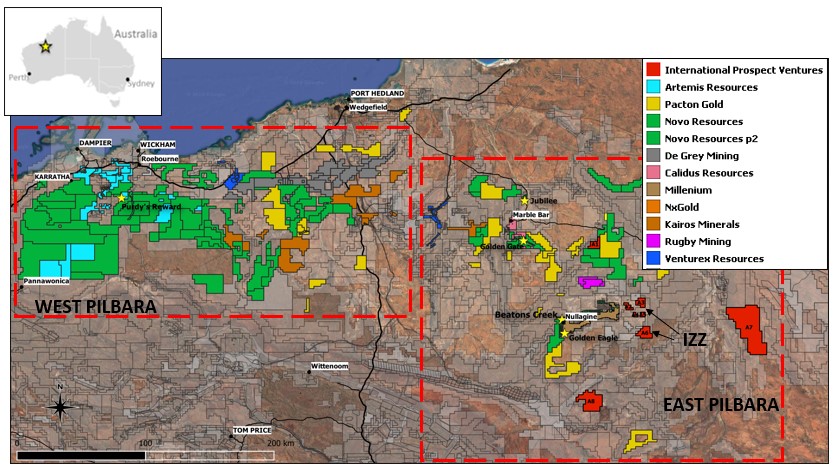 The Early to Late Archaean Pilbara Craton, a 600 kilometre-wide portion of ancient crust, underlies the northwestern region of Western Australia. Comprising igneous and metamorphic basement rocks that formed over 3.1 billion years ago, the Pilbara Craton is thought to have been previously connected with the Kaapvaal Craton that underlies much of South Africa. When connected, these two cratons formed the Vaalbara supercontinent and between 3.1 and 2.7 billion years ago, layers of terrestrial sedimentary and volcanic rocks were deposited across the Vaalbara. In South Africa, these sedimentary and volcanic rock units make up the Witwatersrand and Pongola basins and in Australia similar sedimentary and volcanic rocks make up the Hamersley Basin. Sometime following deposition (~2.7 billon years ago), the Vaalbara continent broke apart, separating the Kaapvaal Craton (South Africa) from the Pilbara Craton (Australia). While not identical, there are strong geological similarities between the South African Kaapvaal Craton/Witwatersrand Basin and the Australian Pilbara Craton/Hamersley Basin. 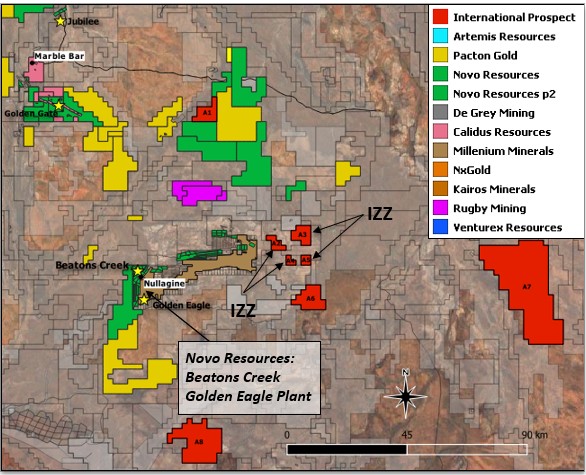 The Hamersley Basin and Fortescue Group

The Late Archaean–Palaeoproterozoic Hamersley Basin and related sub-basins formed on an older granite–greenstone basement (Pilbara Craton) during the initial stages of Late Archaean continental rifting. The Fortescue Group, which ranges in age from 2.8 to 2.6 billion years, unconformably overlies the granite–greenstones of the Pilbara Craton and is commonly compared to the Ventersdorp Supergroup of the Witwatersrand Basin in South Africa. Gold-bearing conglomerates have been identified by Novo Resources Corp. at several stratigraphic levels in the Fortescue Group (e.g., within the Nullagine sub-basin). Similarities between palaeoplacer deposits hosted by conglomerates in the Fortescue Group and the gold-bearing reefs mined in South Africa have been recognized for over a century.

In 2016, approximately 45 kilometres south of the town of Karratha, metal detectorists ("fossickers") discovered several areas that were particularly rich in gold nuggets. Metal detectorists have been active along an 8-km long corridor underlain by conglomerate horizons that are part of a 50-100 metre thick sequence of sedimentary rocks at the base of the Fortescue Group. It's interesting to note that this sequence of sedimentary rocks does not appear on most geological maps. Recently, prospectors discovered gold nuggets in-situ, within outcrops of conglomerate, verifying an origin for gold nuggets.